"Trying to prove he still can." 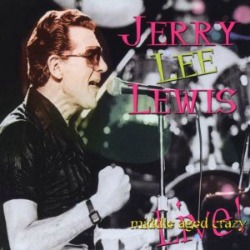 The Middle Age Crazy Lyrics was written by Sonny Throckmorton in 1977 and became a #4 hit song for Jerry Lee Lewis.

This is Classic Country, delivered by one of the very best in the business.

Jerry Lee's recordings for Sun are some great Classic Rock sounds, but his Country music vinyl record memories puts him on an entirely different level.

As one individual remarked after listening to a Jerry Lee Lewis Country Album...

"This man's voice consistently puts the listener's goosebumps at strict attention, in a way that propels him beyond many country singers today, to a level just a shade below the King himself."

Can't argue with that can you?

Over the years, I've always said Merle Haggard is my favorite Country music singer, but when you listen to Lewis and read what's said about his music it's hard not to realize that he truly is just a shade below the King.

As I enjoy comparing Country Cheatin' songs and  "Best Beer Songs/Bar Songs" ever written, this one fits right in.

For many of you who believe "The Killer" was just a Rock-n-Roll artist, listen to his Country songs on these pages and then judge for yourself how well he really tells a story with feeling.

I think you'll be surprised the emotion he puts into his songs.

The Middle Age Crazy Lyrics in this song seems as though it was written for Jerry Lee's Lifestyle, with the closing lyrics, "Trying to prove he still can".

He faces the hard fact he's turning forty years old. One minute, he's having dinner with the wife to commemorate the occasion, and the next he's faced with  the truth, that the thrill is all gone when they cut down the lights.  He leaves alone to celebrate his birthday at the corner bar with his best buddies.

Blowing out those candles with his friends and the big 4-0 attached turns into a middle age crazy moment, and a place he yearns to be. Today he's forty years old, going on twenty, and he's got a young thing beside him that just melts in his hand.....He's Middle Age Crazy, trying to prove he still can.

Enjoy this Classic Country song from 1977.

Today he traded his big 98 Oldsmobile
He got a heck of a deal...On a new Porsche car

An today he's forty years old going on twenty
Don't look for the grey in his hair...'Cause he ain't got any

He's got a young thing beside him...That just melts in his hand

He's middle aged crazy
Trying to prove he still can

He's gotta a woman he's loved for a long long time at home
Ah but the thrill is all gone...When they cut down the lights

They've got a business that they spent a while comming by
Been a long uphill climb...But now the profits are high

And the young thing beside him...You know she understands

That he's middle aged crazy
Trying to prove he still can