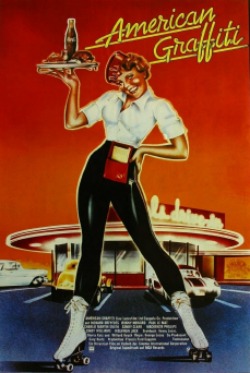 A definitive slice of Americana, this fun-loving, laugh-filled American Graffiti movie is filled with wonderful old song memories that recaptures the sights and sounds of the 1950s-60s era like few films before or since.

If you lived during the time this all happened you will love this movie. It is literally the soundtrack to the generation.

The movie captures playfully what American culture was all about, particularly in 1962 as portrayed by the many stories it tells. This nostalgic look back follows a group of teenagers as they cruise the streets on their last summer night before college.

American Graffiti is a bittersweet yet comedic look at what some may say is "America's last age of innocence."

It's a classic coming-of-age story set against the 1960s backdrop of hot rods, drive-ins and rock n’ roll...and is considered one of the best teen movies ever made.

The Beatles were still unknown on this side of the Atlantic, and drive in diners, soda shops and out door theaters were very popular.

There was no Internet so kids went cruising, looking for girls to pick up or rivals to race in their souped-up hot rods. 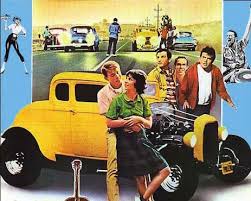 When the film begins, the credits play over a view of Mel's drive-in Restaurant late one summer afternoon as the sun is setting.

A blaring radio plays a familiar rock tune "(We're Gonna) Rock Around the Clock," by Bill Haley and His Comets as friends gather at the restaurant. Another older character, John Milner, pulls up in a yellow, '32 Ford deuce coupe.

Milner has been out of high school for two years and seems content to hang out and look cool. He is a going-nowhere James Dean wannabe and an acknowledged, undisputed drag-racing idol.

Later in the evening, the drive-in comes alive and is crowded with shiny chromed, hot-rod cars. "Sixteen Candles" by The Crests begins to play as Car-hops on roller skates circle around the restaurant delivering orders on window trays to parked cars.

American Graffiti Song Memories.
Was It A Musical? 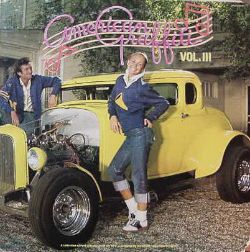 Some may view American Graffiti as a musical with no singing or dancing.

It has plenty of music...but it's not a musical. The film is seamlessly laced with a classic rock-n-roll American Graffiti soundtrack composed of over forty hits.

Each song in the movie provides an emotional context, not just period atmosphere. Sounds emerging from the cruising car radios function as background music to define the emotions, dreams and frustrations of the group at Mel's Diner.

Who Was The DJ With The Gravel Voice?

What united the entire car crazy generation was rock & roll, and regional subsections of that generation were connected usually by a single personality, in the form of a radio disk jockey.

In this case it's the mysterious and almost mystical "Wolfman Jack."

In the American Graffiti movie "The Wolfman" served as a unifying thread to all the subplots and was mostly heard on the radio but seen briefly. 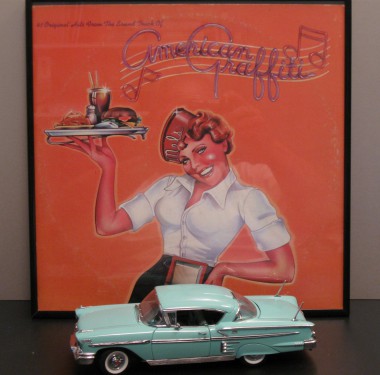 The American Graffiti movie is a realistic portrayal of teens in 1962 with their cool cars, great music, friendships, and relationships.

It has plenty of action, but no blood and nasty language...and there is never a dull moment. There are multiple story lines and a great cast, but it never gets confusing. If you have not seen American Graffiti buy the DVD and you will see how and why this film has become a cult classic.

The American Graffiti movie can so immerse you in teenage cruising-to-rock-radio that you'll feel a part of it even when watching it for the umpteenth time...then be saddened by the passing of a bygone era until you watch it again.

It will bring back great memories of cars, pretty girls and street racing. A time that can never be repeated or duplicated.

The American Graffiti movie is fun to watch and definitely deserves having been voted as one of the American Film Institute's top 100 Films of All Time.

American Graffiti premiered in August, 1973 and became something of a surprise hit. At a cost of a reported $777,777.77 the movie would generate an estimated return of well over $200 million in box office receipts and home video sales.

The soundtrack album reached #10 in America and has been certified triple Platinum.