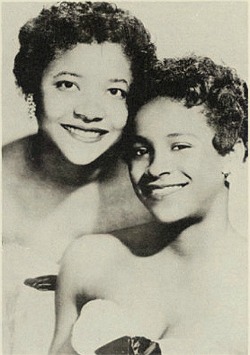 The Eddie My Love Oldies Music Lyrics was written by Aaron Collins, brother of the original Teen Queens, Betty and Rosie Collins.

In the early 50's Aaron moved from his home in Arkansas and began recording for RPM and Modern, a pair of labels owned and operated by the Bihari brothers of Los Angeles.

In the fall of 1955 Collins recorded a song with The Jacks R&B group, giving Collins his first hit record. By that time his family had left Arkansas and settled in nearby Venice, California.

Betty and Rosie (ages 16 & 14) are fascinated by the apparent glamour of show business and ask Aaron to help them with his connections at the record company.

Aaron wrote a song and originally titled the song "Johnny My Love," as a tribute to R&B star Johnny Ace, who accidentally killed himself the previous year.

With his sisters eager for the spotlight he decided to change the title to "Eddie My Love."

Collins arranged for his sisters to record for the RPM label under the "Teen Queens" name.

The Bihari brothers agreed to let the sisters record the song, but there was a catch.  Saul Bihari (using the pseudonym Sam Ling) and the record's producer-arranger, Maxwell Davis (who also played sax on the track), would share in the songwriting credits and potential royalties.

It has been well documented over the years that young artists and songwriters were taken advantage of by money hungry record owners and producers.

"Eddie My Love" hit the rhythm and blues charts in mid-February of 1956. Another similarly-named male act, The Teenagers, released their record, "Why Do Fools Fall in Love" at about the same time.

In March "Eddie My Love" became a contender for the #1 R&B spot, but was held back by a strong showing from the Teenagers and lead singer sensation, 13 year old Frankie Lymon.

The Teen Queens song did finish at #3 on the R&B charts, a first for any of the recently-emerging black "girl groups." Frankie Lymon and The Teenagers song ended up #1 on the R&B charts that same year.

Eddie My Love Oldies Music Lyrics - Why this song never reached the top 10.

Dot records released their version with "The Fontane Sisters" and Cadence's "Chordettes" (Sandman & Lollipop fame) followed with their cover into the national Pop charts. 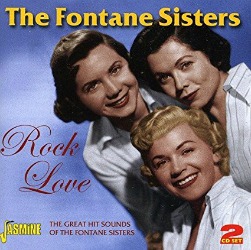 The competition with the three girl groups was fierce and the Teen Queens original entry was suddenly trailing both pop covers, which were getting more airplay.

All three wound up in the top 20 in the spring of 1956, a chart battle that prevented any one from making it to the top ten.

Please continue reading below this original recording of "Eddie My Love" and discover the tragic ending for these young women.

Eddie My Love - Did song lyrics predict the girls future? 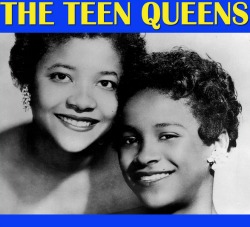 The Teen Queens toured in The Biggest Rock'N'Roll Show of 1956 (alongside Frankie Lymon, Bo Diddley, Big Joe Turner, Bill Haley & His Comets, The Drifters and others), selling out at major venues.

At the ages of 16 and 14, Betty and Rosie Collins were unprepared for the adult situations that came with their brief burst of fame.

The lyrics of their classic song ("Eddie my love...I'm sinkin fast...the very next day might be my last...") can be interpreted as tragically prophetic. (see lyrics in right column)

The sibling Teen Queens found themselves exposed to many situations involving alcohol and drugs.  Aaron had second thoughts about getting his sisters involved in the music business at such a young age.

On the road, entertaining with grueling schedules, the girls shifted into "party mode" and developed hard-to-break habits that extended into adulthood. Aaron had once said his sisters "simply went wild."

Although many may think of the Teen Queens, Betty and Rosie Collins, as an example of a "one-hit wonder," they will not be forgotten.

The youthful amateurishness of the singing on their one hit, "Eddie My Love" probably helped to make the record a hit in 1956. It was one of the first records specifically to direct its appeal to teenagers.

Those pop cover versions by The Fontane Sisters and The Chordettes may have stolen a lot of the glory back in 1956, but it's The Teen Queens original recording of "Eddie My Love" that has stood the test of time.

"I don't usually contact doo wop article authors as I rarely find much of value in the articles, but your article struck me as sincere, genuine and respectful."

Tom Sokira,
Producer, Audio Engineer
"In The Still of The Night" (1956)

Eddie, my love...I love you so
How I wanted for you, you'll never know.

Eddie, please write...me one line
Tell me your love is...still only mine.

You left me last September
To return to me before long
But all I do is cry...myself to sleep
Eddie, since you've been gone.

Eddie, my love...I'm sinking fast
The very next day...might be my last
Please, Eddie, don't make me wait too long.

You left me last September
To return to me before long
But all I do is cry...myself to sleep
Eddie, since you've been gone.

Eddie, my love...I'm sinking fast
The very next day...might be my last
Please, Eddie, don't make me wait too long.