The Locomotion Oldies Music Lyrics was written by American songwriters Gerry Goffin and Carole King and made popular by Little Eva in 1962.

The song is notable for appearing in the Top 5 three times, each in a different decade.

Little Eva was the first in 1962, taking the song to the number one spot, and according to Billboard was the sixth most successful single in 1962.

In 1974 the Grand Funk Railroad's version was also a #1 song, and in 1988 an Australian pop singer named Kylie Minogue again placed the song on the US charts at #3.

This Locomotion was so popular by Kylie that it spent seven weeks at number one on the Australian singles chart and became the highest selling single of the decade. Kylie was twenty at the time.

This song was originally released in June, 1962 the same year I graduated from High School so I wanted to use a video of Little Eva singing the song.  The reason was simple...I actually listened to the song when it came on the old AM Radio for the first time. 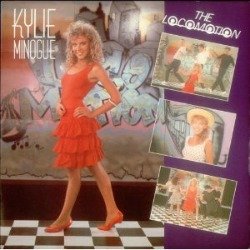 There are Little Eva videos on YouTube but the quality is poor. Grand Funk Railroad has a better quality video but it did not have the original arrangement I was looking for.

Don't forget the "Little Eva" original 45rpm record at the bottom of this page, and hear what the original record sounded like more than 60 years ago.

You gotta swing your hips now
Come on baby, jump up, jump back
Oh, well, I think you got the knack

From here you'll just have to follow Kylie as she adjusts lyrics to her video dance music...

I remember the summer of '62 and the Little Eva Locomotion version that I still enjoy today. One of the most popular dance tunes of the day.