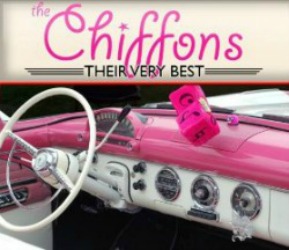 The song was recorded in 1963 by The Chiffons, an all girl group from the Bronx area of New York.

As I listened to this song in a record store recently I over heard one young girl (I doubt if she was twenty) say to her friend;

"If I could go anywhere in the world right now, I'd go back to 1963. Music from back then just makes you feel good."

I could not have agreed with her more.

Wanna return to that feel good music era?  Climb aboard the memory train and travel with me back to yet another great time in history when "One Fine Day" lit up the summer of  '63.

Whenever we hear classic oldies we tend to think back and remember where we were when songs like this were popular. I can recall the first time I heard this great song on my new AM car radio.

Here's my "One Fine Day" story.

My '57 chevy didn't have a radio when I bought it so I purchased one from a junk yard and headed off to see my buddy Steve Meyer.

Steve worked at a Standard Oil Service station and helped me install the radio. Actually Steve did most of the work.

As I left the Service station I tuned into the Dayton radio station W-I-N-G.  After a commercial the first song I hear on my new junk yard radio is "One Fine Day" by The Chiffons.

Now picture this...Here I was, less than a year out of high school, eighteen years old, a recent pay raise to $1.10 per hour, cruisin' around in my '57 chevy and The Chiffons are singing  "One fine day, you're gonna want me for your girl."  Life was good.

Those young girls I over heard in that record store had no idea this old guy had been a part of exactly what they were wishing for.

One Fine Day Oldies Music Lyrics.
How it all began for The Chiffons.

The song was intended for Little Eva of "Locomation" fame but despite that exciting piano entry by King, Goffin and King could not come up with an arrangement they were satisfied with.

The song was passed to "The Tokens" and their thinking was, maybe another song using the word "fine" may have potential since they had recently produced the #1 hit "He's So Fine" by The Chiffons.

The Tokens took the song, changed and re-worked the Goffin/King demo by removing King's vocal but retained her piano work.  The Chiffons then recorded their vocals and bingo, a Top five song on the Billboard Hot 100 chart.

The song is ranked #460 on the Rolling Stone Magazine's list of "The 500 Greatest Songs of All Time."

Here's proof that some things get better with age. Watch this great video of "The Chiffons" with the original lead singer Judy Craig performing at the PBS special, "Doo Wop 51" in 2000.

The arms I long for will open wide
And you'll be proud to have me right by your side
One fine day, you're gonna want me for your girl

One fine day, we'll meet once more
And then you'll want the love you threw away before
One fine day, you're gonna want me for your girl

Head over to my Doo-Wop pages from here.