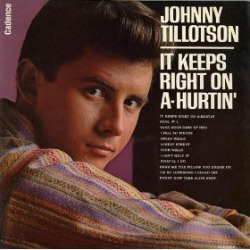 I wrote this Johnny Tillotson old country music lyrics page because I honestly believe his version of the song is the best cover I have ever listened to on this Hank Williams classic.

I don't ever remember purchasing the single when it came out but I did buy the album that included the song.

The album title and lead song "It Keeps Right On A-Hurtin'," was written by Johnny and was inspired by the terminal illness of his father.

Hank Williams Sr. wrote and recorded "I,m So Lonesome I Could Cry" in 1949. The song, of course is about loneliness, and some say was written about his troubled relationship with his wife Audrey.

Johnny Tillotson Never Got Credit
For A Song He Did So Well.

Hard to believe Johnny never received is due for a song done so well. My belief is that three songs off the album did well enough on the country charts to keep my favorite Johnny Tillotson cover from much air time.

It is truly amazing to me that of all the artists that covered this beautiful song Johnny Tillotson never received the notice or credit he deserved for his flawless recorded performance.

He took this song and made it his own as much as anyone. I'll bet Hank would be proud of the way Tillotson treated his beautiful lyrics.

I have not heard anyone sing this song with Johnny's clear voice and perfect phrasing.

Johnny Tillotson Old Country Music Lyrics.
Who did better on the charts?

I have a copy of that 45rpm single and Terry does a really fine performance on the song but I always liked Johnny's better.

Jerry Lee Lewis' version reached #43 on the Billboard Country Singles chart in 1982 but the Johnny Tillotson old country music lyrics cover only managed to chart at #89.

Rolling Stone magazine ranked it #111 on their list of the 500 Greatest Songs of All Time. It is the second oldest song on the list, and one of only two from the 1940s.

Elvis mentioned during his legendary 1973 televised concert in Hawaii that this song was one of the saddest songs he had ever heard.

Please enjoy my all-time favorite cover of this wonderful song and as you listen to Johnny's version see if you may agree this song deserved better than a #89 performance on the Country charts.