I enjoy many guitar players but one of my all time favorite's is James Burton. Some of you might say, James WHO. Please read on...

Burton was born in Dubberly, Louisiana in 1939 but grew up in Shreveport.

At 14 he was working club gigs and private parties. He even skipped school just to be able to play guitar. It wasn't the money, it was just for the thrill of playing.

He had enough talent at a young age that the producer of the Louisiana Hayride asked him if wanted to do some shows and join the staff band. He was only 14 at the time and played behind guys like George Jones, Billy Walker and Johnny Horton.

While he was in Hollywood playing in a band, Ricky Nelson heard him rehearsing, and he soon got a telegram and an offer to be on the Ozzie and Harriet show as member of Nelson's back up band. 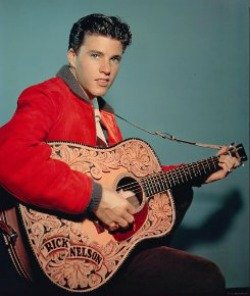 At the beginning,  James played rhythm guitar for Ricky and was actually living with the Nelson's. Ozzie and Harriet had invited him to stay at their home. He lived with them for about two years before getting his own place.

He played his first lead guitar recording with Ricky on one of my favorite Ricky Nelson songs "Believe What You Say." After that he played lead on every record Ricky Nelson made between 1958 and 1967.

This is what John Fogerty and George Harrison had to say about James and his early Ricky Nelson years.

"James Burton was one of my earliest guitar influences. The Rick Nelson stuff... things like 'Believe What You Say'... is just mind boggling". John Fogerty, GP Magazine, 1986

"Those early sounds that we did, I just hated them. They sounded so puny. I mean, listening to James Burton playing on the Rick Nelson records... and we would come up with our stuff that was so feeble." (reflecting on The Beatles' early career) George Harrison, GP Magazine, 1985.

In 1968, he was working with Frank Sinatra when Elvis called him and wanted him to do an NBC show that would later be know as the '68 Comeback Special.

He was so busy with studio work he was unable to work with Elvis, but a year later Elvis called again and James was available.

While talking to James on the phone Elvis told him that he watched the Ozzie and Harriet show just to see him play at the end of the show.

During his '69 performances, he always introduced James as his favorite guitar player.

Another one of my favorites by Elvis is the song, "The Wonder of You." Watch how Elvis shows respect for his friend and favorite guitarist, James Burton. As he begins the guitar solo Elvis says, "Play the song James" and then points toward him giving him the stage.

Also,  notice that James is playing his famous "Pink Paisley" guitar that Fender created in 1969 as a special model for Burton. In the second video below, James explains in the interview what Elvis thought of the Pink Paisley when he first brought it on stage.

Elvis and the talented backup singers.

You may have never heard of the Holladay Sisters — Ginger and Mary — of Pell City, Alabama. You've heard their voices on Dave Loggins, “Please Come to Boston” and for Willie Nelson and Elvis on "Always On My Mind." They also sang backup on the Elvis hits “Suspicious Minds," "In the Ghetto," "The Wonder of You" and "Burning Love."

Another reason we like to give credit to those faceless voices that have been in your head for years.  And no, the sisters once said, they don’t mind being known forever as Elvis’ backup singers.

James Burton and his famous friends.

James played with Elvis as a member of the TCB band until Elvis' death in 1977.

Burton played great music with Elvis but some of his iconic guitar hooks with Rick Nelson and Merle Haggard were just as memorable. Great hooks with Merle Haggard hits, like "Momma Tried" and "Working Man's Blues." He also added the guitar licks to the Jerry Lee Lewis version of "Working Man's Blues." Burton made the telecaster viable instead of a student grade guitar.

After reading this page and watching these two video clips you can see, and listen to why I view James Burton as one of the best guitar players of all time.

When you see some of them old clips of Ricky Nelson singing on the Ozzie & Harriet Show and Elvis performing in Las Vegas, you'll at least know who the lead guitar player is standing next to them....James Burton.

James Burton was inducted into the Rock and Roll Hall of Fame in 2001.

Take a look at the following interview and listen to how Burton describes his friendship with Elvis.  James' comments reveals how much Elvis appreciated everyone around him.

How I took a Hobby....And created a website about my passion.

Do You Know Something About Anything? A Hobby? A Passion?

The song "I will follow you" was included on Rick's 1963 album titled "For Your Sweet Love," a Top 20 album that same year. Watch Ricky's cover of this classic oldie. 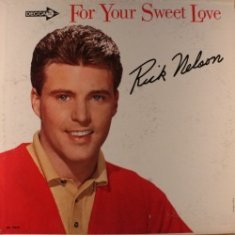