It's Up To You Lyrics 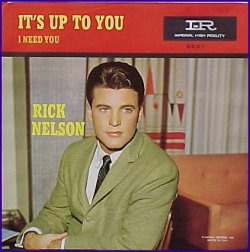 It's up to you lyrics was written by Jerry Fuller and became a top ten hit for Ricky Nelson in 1962.

The song was originally included as the title cut on the 1961 album "Its Up To You."

It's up to You lyrics - Jerry Fuller penned several top ten songs for Ricky.

Fuller went on to write 23 of Nelson's recordings, including "A Wonder Like You", "Young World", and this song, all of which made the US Top 10.

The following video is from the "Adventures of Ozzie and Harriet" family show around late 1962.  I have included the lyrics for you to enjoy.

It's up to you...Because I've done everything I can
I hope that you...Will say that I'm your lovin' man

make up your mind...And do what you're gonna do
Well you know how I feel...So I'm leaving it up to you

It's all so clear...That I would give everything I own
To have you near...Never leave me all alone

I need your love...So, darling, please be fair
Let me know where I stand....And I hope that you say you care

Well I've laid my cards on the table....And its oh so plain to see
That I'm ready, willing and able...To love you faithfully

Make up your mind...And do what you're gonna do
Well you know how I feel....So I'm leaving it up to you

Make up your mind....And do what you're gonna do
Well you know how I feel...So I'm leaving it up to you