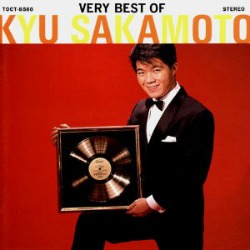 The Sukiyaki Vinyl Record Memories returns to 1963 when a song by Kyu Sakamoto became a surprise #1 hit during the summer of that year.

The song was written by Hachidai Nakamura (music) and Rokusuke Ei (lyrics).

Some say it was a terrible choice to give a beautiful ballad such a silly name related to a food that has nothing to do with the lyrics or the meaning of the song.

A Newsweek music critic pointed out at the time that this was like releasing "Moon River" in Japan with the title "Beef Stew."

Maybe Sayonara rather than Sukiyaki would have been more in line with the lyrics of the song.

But as I remember quite well, it really made no difference to me at the time what the name of the song was. I simply loved the melody.

Kyu Sakamoto had a great voice, the melody was fantastic and it was just another really nice feel good song. What else mattered when you didn't understand the words.

Kyu Sakamoto originally released the song in 1961 under the Toshiba label where it became a #1 hit in Japan. Sakamoto was a well known film star and recording artist at the time.

In 1962 a British music executive, Louis Benjamin, heard the song while he was in Japan.

He had his group "Kenny Ball & his Jazzmen" record an instrumental version but were concerned that the English speaking audiences might find the original title "Ue O Muite Aruki," too difficult to pronounce.

Benjamin enjoyed the Japanese dish Sukiyaki and renamed the song after the food. The song ended up at #10 on the UK charts. 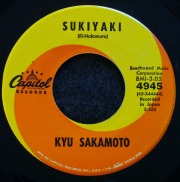 The song finally ended up in America where a disc jockey in Washington state listened to the British version but played the original by Kyu Sakamoto using the Sukiyaki name.

Are you with me so far?

Requests begin pouring into the radio station for this beautiful song with Japanese lyrics that I'm sure very few in the US could understand.

Capitol Records obtained the US rights to the song and released it stateside where it replaced "It's My Party" on the Billboard Hot 100 in June of 1963. Pretty amazing since the lyrics to the song are not in English, but somehow still managed to receive a #1 ranking on a US music chart.

A Sad Ending But A Nice Video Tribute To A Beautiful Song And Talented Singer.

Sadly, Kyu Sakamoto was one of 520 people who died in a Japan Airlines crash in 1985. He was 43. This was and still is the world's worst accident involving a single airliner.

The original title means "I look up when I walk" and the lyrics to the song were inspired by Rokusuke Ei's breakup with actress Meiko Nakamura.

Please enjoy this wonderful video shot by Jim McGee while working with US Army Japan as a broadcast journalist. All video was filmed in Japan, mostly in Tokyo.

Remembering those autumn days
But I am all alone tonight

All photos on this page lead to more great
Vinyl Record Memories.