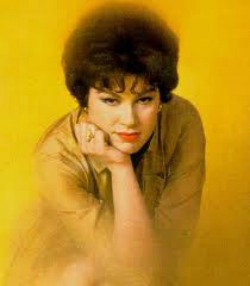 Patsy Cline song memories returns to 1961 with her first #1 song, I Fall to Pieces, and along with "Crazy" in 1962, became two of her most-recognizable hit singles. Both will forever be classified as Patsy Cline country music standards.

I Fall To Pieces was released as a single in 1961 and was featured on her Decca studio Album Patsy Cline Showcase.

It was not only her first #1 country hit, it was her second hit single to cross over to the Pop charts.

The Lyrics were written by Hank Cochran and Harlan Howard and was originally offered to Brenda Lee by producer Owen Bradley. At the time, she found the song too country for her pop style.

After the song was turned down numerous times Bradley asked rising country star Roy Drusky to record it, but he also turned it down stating that it's not a man's song.

Patsy Cline overheard Drusky's argument with Bradley and asked if she could record it instead.

She also argued with Bradley because he wanted the song recorded as a Pop ballad and Patsy felt that didn't suit her style. After several arguments the song was recorded in the style that Bradley wanted it. After listening to the playback she ended up loving the Owen Bradley style song, just as Owen had originally wanted it recorded.

Enjoy the Patsy Cline "I Fall to Pieces Lyrics" about how a woman's lover doesn't want them to be together, yet the woman can't understand why, explaining that every time he walks by she "falls to pieces."