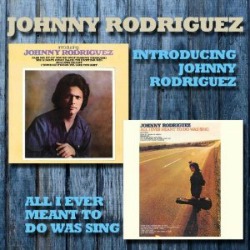 This Johnny Rodriguez Albums page refers to a song from Johnny's album titled "All I Ever Meant to Do Was Sing" and the song from the album titled, "That's The Way Love Goes."

This was Johnny's second album released in 1973. The Album reached #2 on the US Country charts and produced two #1 hit songs off the album.

Although the Merle Haggard version is the one we hear the most, I also enjoy Johnny's smooth original #1 version just as much.

They both had number one hits with the song so they both get a place here and everyone can enjoy each performance.

I've listened to both artists sing this song many times over the years and if you have never heard the Johnny Rodriguez version, I think you will be pleasantly surprised.

And if you are an Eagles fan Johnny does a great cover of their hit song, Lyin' Eyes from 1975. Rodriguez recorded the classic a year after the Eagles and it is an outstanding cover of the song, my favorite of all the Lyin' Eyes cover songs

Please enjoy the video and be sure to read the interesting song facts below.

The song was written by Lefty Frizzell and Sanger D."Whitey" Shafer.

Most of us know who Lefty Frizzell was but did anyone know that Whitey Shafer wrote songs for George Jones, Moe Bandy, George Strait and many others that became successful on the U.S. country charts?

Remember George Strait's "Does Fort Worth Ever Cross Your Mind" and "All My Ex's Live in Texas"?

Both were #1 songs written by Shafer with help from two of his Ex wives.

It's pretty unique that three divorcees would sit down together and pen "All My Ex's Live in Texas," and end up with some pretty darn good old country music lyrics.