Ringo's drumming is rock steady on this classic, way better than when he was with the Beatles.

The Ringo Starr Rockabilly music selection Honey Don't was the first track on side two of the album.

The Album was a huge success in the US and jumped from 98 straight to number one, making the biggest jump to #1 in the history of the Billboard Album Charts up to that time. 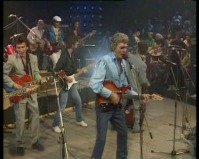 Ringo is in rare form, reminding us how he's truly one of the last breed of rock drummers. So what if he sings lyrics in any order he pleases... Who notices and who cares when he plays like this.

So peel back the carpet and put your dancin' shoes on, you're gonna love Ringo at his best. If you are a true rockabilly fan you won't be disappointed...I promise.

Well how can you say you will when you won't
Say you do, baby, when you don't
Let me know, honey, how you feel
Tell the truth how is love real

Well sometimes I love you on a Saturday night
Sunday morning you don't look right
You've been out painting the town
Uh baby, been stepping around

Well sometimes I love you on a Saturday night
Sunday morning you don't look right
You've been out painting the town
Uh baby, been stepping around

Special side note: Ringo left out a verse to the original lyrics for this video so I added the lyrics as Ringo sang them on the video. Did not have any effect on the song and Ringo did the best I ever heard him sing on this song.

Eric Clapton - A Smokin' Guitar on the Matchbox Lyrics