Forty years later she performs with her daughter in a 1999 special called "Rock-n-Roll Graffiti" and...WOW! This lady is still HOT and everyone singing is actually having a good time with her.

Many of us who were teenagers at the time remember the song when it was released in 1959. I originally thought the song was kind of goofy until you listen real close to those classic oldies lyrics.

Toward the end of 1958, a few months before Dodie's song became popular, The Kingston Trio had taken a story about the hanging of a condemned man named "Tom Dooley" to the top of the charts.

Suddenly, this other cool cat named "Dooley,"  a dude with tan shoes and pink shoelaces, appeared on the music scene with his girlfriend named Dodie.

Which Dooley Do You Remember? 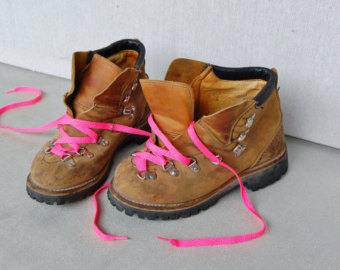 It would be hard not to remember Dodie's guy. He wasn't mean like Tom Dooley, he just dressed loud.

You may remember Carl Perkins had established a fashion trend with "Blue Suede Shoes," but Dodie's guy went way beyond as she described his cool wardrobe with this verse...

"a polka dot vest and man oh man, he wears tan shoes with pink shoe laces, and a big panama with a purple hat band!"

Some might say anybody that dressed like that had to be named after a guy that was lynched :-) Not me...I remember how loud I dressed when Elvis appeared on the scene so I'm sticking with Dodie's guy, Dooley.

Pink Shoe Laces was a pretty cool song, but all these years I've wondered about that 12-foot yacht and a guy that would take a girl deep sea fishing in a submarine....

Before you watch Dodie and her daughter perform the song on a 1999 "Rock-n-Roll Graffiti" special, let's take a look at Dodie when she sang this cute song back in 1959 when she was just 13 years old.

You're gonna love this original black and white video showing how teens communicated in the 50s.  This was an exciting time when you actually talked to your girlfriend or boyfriend about dating and the world of texting was decades away.

Dodie Stevens voice was mature beyond her thirteen years. She recorded Yes, I'm Lonesome Tonight, in answer to Elvis' number one song.

The song charted #60 on the Billboard Hot 100 in December 1960. She also recorded a Christmas song that is still played every year during the holidays.

"Merry Merry Christmas Baby" (set to the tune of The Tune Weavers' "Happy, Happy Birthday Baby") was her contribution to the 1960 holiday season.

She really did have a nice voice but will always be remembered for Tan Shoes and Pink Shoe Laces.

Enjoy this well done second video of this all time classic. Dodie performed on this special 40 years after her original hit, and just look at her. She's still having fun.

Now I've got a guy and his name is Dooley
He's my guy and I love him truly
He's not good lookin'...heaven knows
But I'm wild about his crazy clothes

He takes me deep-sea fishing in a submarine
We go to drive-in movies in a limousine
He's got a whirly-birdy and a 12-foot yacht
Ah...but thats-a not all he's got

"Just before the angels come to carry me
I want it down in writin' how to bury me."

And a big Panama with a purple hat band!