The Misery and Gin lyrics was written by John Robert Durrill and Snuff Garrett and became a #3 hit song for Merle Haggard in 1980.

I originally thought Merle had written these classic old country music lyrics because it seemed to fit his early lifestyle.

Misery and Gin was the first single off the album "Back to the Barrooms" and although Merle didn't write this one he did write or co-wrote seven of the eleven songs on this album.

Hard to imagine anyone else singing these lyrics and trying to out do Merle on this tune. He owns this one.

Misery and Gin Lyrics.
Words Alone Make This One A Honky-tonk Classic.

Man oh man...and then the fourth verse tells you why this is a bar room favorite.

After listening to that verse I went for another cold one, put on my headphones and added a couple of notches to the volume control.

My evening with classic honky-tonk was just getting started. The needle made contact with the record and those magical Merle Haggard sounds began to play.

Sounds that can only be appreciated with the warmth of vinyl and the solid gold hidden in those grooves.

The video below shows the fiddle player smiling after that fourth verse. I think we can all figure out what he was thinking.

Is This The Best Barroom Song Ever Written? 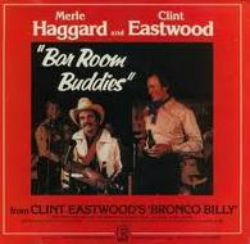 Follow along with the Misery and Gin lyrics. When finished what else can you say...Damn that's a good song and an even better melody.

Merle may not have written the song, but his whiskey-soaked voice certainly made this classic a bar room favorite, and among my favorite vinyl record memories in my Merle Haggard collection. One of the final hits of Haggard’s brief stint at MCA, no song in his catalog evokes sadness and loneliness as much as this potent number. A rarity in the case that he didn’t write it, but he made this song all his own.

This song should be in the top 5 of all bar room songs ever written, I'd say even #1.  Just my opinion.

But here I am again...mixing misery and gin
Sittin' with all my friends and....talkin' to myself


I look like I'm havin' a good time....but any fool can tell
That this honky tonk heaven....really makes you feel...like hell.


Her life story and mine are the same
We both lost someone....and only have ourselves to blame


But here I am again...mixing misery and gin
Sittin' with all my friends and...talkin' to myself


I look like I'm havin' a good time....but any fool can tell
That this honky tonk heaven....really makes you feel...like hell